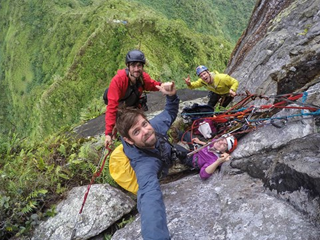 Adrenaline junkie Ambassador Mike Libecki is never one to turn down a challenge. One look at the mysterious rock towers on the island of Ua Pou is all it took. He knew he had to get there.

Suffering is an interesting term. From my point of view, it might not be suffering at all if suffering is hoped for, obsessed about, and self-induced. That age-old saying often rings true on my expeditions: “Be careful what you ask for—you may just get it.”

In 2007, while researching exotic rock formations in the eastern islands of Papua New Guinea, I came across interesting folk tales about ancient glowing orbs on pointy rock summits in the South Pacific. Fascinated by these rumors, I soon discovered images of the Marquesas Islands, north of Tahiti, and the rock towers of the island of Ua Pou. It was one of those moments of pure clarity: I knew I would go there, without any doubt.

In the spring of 2013, alone, I flew into Nuka Hiva, an island north of Ua Pou. Heavy rains prevented me from continuing by plane to that fantasy island. Fortunately, a very nice Marquesan offered to help me arrange a boat, and also to stay at a house on Ua Pou with her brother and father.

The first three days on the island were consumed with constant rain. The towers played hide-and-seek behind the clouds, teasing and tormenting me. Finally, I met KauKau, who agreed to go into the jungle with me. We spent days trekking through thick jungle with huge haul bags full of climbing and bivy gear, and made it to the base of a couple of the towers. We camped in the rain, had a lot of laughs, and then retreated. I was not prepared for a solo ascent in the insane rain coupled with jungle madness.

In February 2015 I returned to Ua Pou, this time with wonderful friends— Angie Payne, Keith Ladzinski, and Andy Mann—and fully prepared for any amount of rain. Once I finally started leading pitches up the tower of Poumaka, I only wished rain were the crux.

After three planes and a two-hour boat ride, we made it to Ua Pou, where my first visit here now paid off. I had arranged all the logistics with my friend KauKau and others before we arrived. We wasted no time and headed into the jungle—a dozen of us carrying waterproof loads of gear. The goal was to head into the middle of the island, where we would be surrounded by several huge towers, including Poumaka, the master of Ua Pou and surrounding islands, according to legend.

With KauKau leading the way, we started climbing through steep jungle in hopes of finding the base ofthe master tower. Four pitches of jungle mayhem brought us to the top of a knoll beside the tower. We moved to a high camp here via fixed lines over the next couple days.

The plan was that I would lead all the pitches on the tower, and Angie would belay and clean, while Andy and Keith captured imagery. Angie, one of the world’s best boulderers, had never done anything like this before, but her energy is so positive, her focus so intense, her attitude so genuine that I knew she would crush this.

I started the first lead with crampons strapped to my free climbing shoes in order to get through the initial jungle stuck to vertical stone. I took them off after 20 feet, once I could touch rock. Wet rock. Muddy rock. The wall was soaked from constant dripping. I continued free climbing and tried to place a couple cams—no way they were going to hold in the muddy, thin crack. A couple of pins hammered in nicely. I finally got in a decent cam—or so I thought. Then I had to do a little runout on vegetation and muddy stone. WHIP! SLAM! The cam ripped out and I crunched onto the ground. Fortunately, the vegetation worked as a nice crash pad. I could tell Angie was a bit freaked out. “No worries, I’m OK,” I reassured her.

By the time I made my way up the first pitch, everything was soaked. I could literally wring water out of the rope and webbing. It would be this way for the next eight days.

The next day we started up pitch two on overhanging, coral-like rock. My second piece of protection, a small nut levered in the coral, popped out. WHIP! SLAM! I fell hard beneath Angie, my knee smacking into the toothlike rock. I could feel blood running down my leg into my socks and into my shoes. I said to Angie, “Don’t worry, I am fine, really.” I got back on lead and made my way through the delicate rock, digging into muddy cracks for every single placement. Chinese water torture the entire way. Bird beak after beak after beak. Had I not brought a couple of dozen beaks, this route would not have been possible. One of the pitches got an A4 rating, though I later pulled it down to A3 —I think the rain, mud, and being constantly soaked added to the sense of difficulty.

It was time for a summit push. We got an early start and all jugged the fixed lines to a decent ledge at the end of the fifth pitch. From here I had to traverse around a corner and into vertical rock covered in vines and thick flora. I felt like a spider, hoping that equalizing my limbs on vines would somehow hold me. Finally, I made an anchor. Everyone came up, all saying it was pretty much the worse thing they had ever done. I headed up into the steep, unknown jungle. Back to equalizing all my limbs on strange flora, hoping to not whip again. An hour later, I belayed in a small, wet cave, water dripping through cracks in the ceiling. I was maybe 50 feet below the summit.

It was close to dark as I started the last pitch. Twenty minutes later I was on the summit, the wind and rain threatening to blow me off the top. I radioed down to the team, “Someone’s gotta come up and clean. Then let’s get outta here!”

No, its not really suffering if it is hoped for, obsessed about, and self-induced. It’s better described as pre-joy, because whether pre-joy or actual joy, there’s always some form of joy.