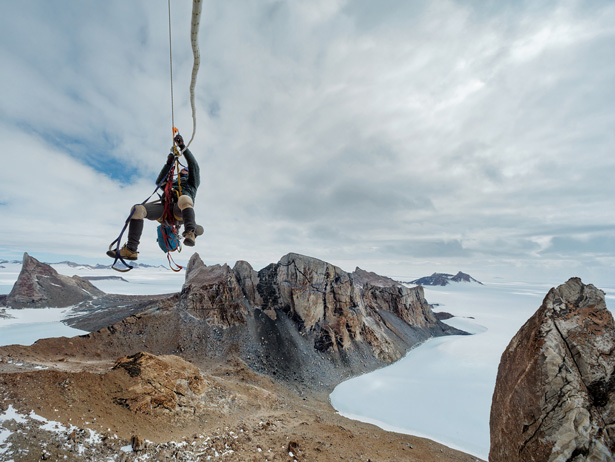 The rumbling outside my tent sounds more like an earthquake than the wind. I instinctively flinch, burrowing deeper into my sleeping bag. I’ve faced terrifying winds before: the roar of the jet stream in the Himalaya at night, the fearsome howl of a Patagonian tempest. This is worse.

The ground shakes as the next surge races toward me. My tent is lashed between two boulders in a desolate wilderness deep in the Wohlthat Mountains of Antarctica. My three teammates are hunkered down nearby. Fifty miles to the south is the edge of the Polar Plateau, the vast frozen upland that dominates the continent’s interior. Geography and gravity combine here to unleash powerful katabatic winds—dense waves of cold air that rush down mountain corridors like avalanches tumbling toward the sea.

The next blast hits. The poles of my tent arch inward, collapsing the fabric above my sleeping bag. For a moment I register the machine-gun rattle of stitching tearing. Suddenly I’m spinning, flying through the air, flipped upside down. Still inside my tent, I’m picked up by the wind and thrown against a crude stone wall I had built for protection, then tossed right over it. Books, camera gear, and dirty socks are thrown about indiscriminately. Down feathers flutter from my sleeping bag.

My neck and shoulder tingle. Crawling toward a slash in the tent, I grab the fabric and rip the hole wider. Shards of sand and spindrift sting my eyes as I stick my head out and cry into the melee.

Coming to Antarctica was Mike Libecki’s idea. Equal parts California surfer dude and hard-edged adventurer, Libecki, 40, has made dozens of first ascents around the world. Tall and soft-spoken, with swatches of gray in his blond hair, he projects a relentlessly positive energy. “I’ve been there before,” he said of the region known as Queen Maud Land, where only scientists usually venture. “I’ve got the keys to the castle.”

Libecki also recruited a pair of seasoned climber photographers to go with us: Keith Ladzinski, a bushy-browed Coloradan, and Cory Richards, a Utah native with a devilish grin. Our plan would be to find the highest concentration of unclimbed peaks in the region, and then make as many first ascents as we dared.

We begin our journey in early November, landing at a blue-ice runway near a Russian research station named Novolazarevskaya. “Last time I was here, I peeled potatoes in the kitchen to help pay for the trip,” Libecki says of his visit eight years ago. The head of the station welcomes us with toasts from a bottle of home-brewed black plum whiskey. Despite the industrial-style accommodations, a sense of happy purpose seems to unite everyone at the station, from the scientific teams to the kitchen staff and mechanics.

“There are no casualties, no car wrecks, and no bullets here,” Benjamin Novikov says over a cup of tea in the mess. A retired surgeon from St. Petersburg, Novikov serves as the camp doctor. “We are living on our own, facing elements, and everyone behaves in the proper way. We tell our families we come for the money. But really, we come to escape.”

For five days we bide our time as a storm batters the camp. Then on the sixth we load our gear aboard a converted DC-3 and leave the Russians behind. Once airborne the four of us crowd forward to gaze out the cockpit windows. A dark phalanx of rocks stretches to the horizon. As we fly closer, what first appeared to be a monolithic wall turns out to be a series of mountain ranges, great stone divides cleaving glacier systems flowing from the Polar Plateau. Soaring cliffs and needle-sharp towers appear. A tooth of rock rising off our left wing looks familiar: It’s the same spire Libecki had photographed years before. We’ve found our target.

An hour later we’re standing on the glacier as the plane lifts off again. We listen to its drone fade into the distance. For the next five weeks our only link to civilization will be our satellite phone. Picking up shovels and saws, we start constructing a camp from blocks of hard snow. By late afternoon we’ve cobbled together a circular barrier 5 feet tall and 30 feet in diameter. A skirmish line of low clouds appears as we settle in for the night.

The next afternoon the wind teaches us another lesson. To help us cover as much ground as we can, Libecki has brought along kites to pull us on our skis. But as we set off to scout the most promising peaks, the swirling gusts refuse to cooperate. We watch as Libecki gamely unfurls one of the small wings of parachute cloth and launches it into the air. Within seconds he’s accelerating cross-country like a cowboy atop a runaway horse. Sinking lower in his harness, he widens his stance to regain control. But after a couple hundred yards he purposefully drops flat, body-slamming the hard surface of snow to check his speed. The wind wrenches the kite’s bar from his grip. Luckily it catches on a protruding piece of snow a hundred yards away. We pack up the kites for another day.

There are plenty of tempting climbs here: a cluster of tack-sharp rock pyramids we dub the Fortresses; a 3,000-foot wall of rock soaring from the ice that we call the Ship Prow; a peak resembling a lighthouse; and a big triangular wall we name the Sail. But by the time we complete our two-week tour, we all agree that our first objective must be the slender spire directly behind our camp.

Like a massive tooth of wind-carved stone, the peak holds no snow. Facing northwest, the wall above our camp is infused with red swirls and mysterious pockmarks. To the left, facing east—the side that catches the wind—the wall is marble gray and rounded smooth like the hull of an aircraft carrier. The two faces converge in a sharp pillar of rock, jutting due north. We can only guess how tall the spire is from base to summit: perhaps 2,000 feet, maybe more.

As I stand below it, my blood tingles with nervous excitement. This is what we came for, a chance to complete a first ascent in this otherworldly frontier. But we’ve already had a taste of the katabatic winds on flat ground. What would happen if they return while we’re up on the wall? Libecki, naturally, wants to start climbing immediately.

Our strategy is for Richards, Libecki, and me to fix ropes to a bivouac on a ledge about two-thirds of the way up, while Ladzinski photographs us from below. But the wind fights us at every stage, and it takes us two weeks just to reach the ledge.

Our new home is a perch the size of a farmer’s porch, 1,200 feet off the ground. One evening at dinner Richards tosses a few stones off the edge. They tumble through space for 20 long seconds before hitting the surface with a crackle of dust, having never touched the wall.

“Who’s taking low bunk tonight?” he asks, joking. Our portaledge shelter, a cross between a tent and a cot attached to the wall, holds only two, so someone must spend the night outside, with just a sleeping bag for protection from the elements. The flattest piece of real estate is a nook inches from the void. I sigh and volunteer.

For the next three days we make steady progress, fixing ropes up the spire and returning to the ledge each night. But we know how exposed we are here if the howling winds return. In a decade of climbing I’ve never lost a tent to a storm. On this trip we’ve lost three: two buried in snow and the third flipped upside down as I lay inside. Libecki pulled me from my tattered shelter after hearing my call for help. He was laughing as he did so.

Now, with time running out, Libecki asks for our attention as he chews his dinner ration of cheese. “You know, my grandmother told me the time is now,” he says. “I got that from her. We used to ask, ‘Grandma Bertha, what time is it?’ And she’d always say, ‘The time is now, goddamn it!’”

With any luck, he says, we could reach the summit soon.

The next morning it’s my turn to lead. As I ascend the rope to where we left off, the overhanging rock leaves me dangling 1,600 feet off the ground. Libecki belays me, prepared to hold the rope fast should I fall. Searching for the best holds with my gloved fingers, I make my first tentative moves on the vertical rock face. To reach the top I must cross the most exposed section of the entire pillar.

“Watch me—this is getting weird,” I call down to Libecki, as I reach for a more promising line of cracks. A sudden downdraft surges past me, tugging the rope between us. If there’s one thing we’ve learned, it’s that a sudden burst of katabatics can strike at any time, even on the nicest days. I swallow my doubts and let the crack lead me over a bulge and across an improbable slab, higher into the sky.

The very top of the slender spire we would later name Bertha’s Tower is a mushroom rock the size of a coffee table. I stand on its head and see, far below, the tiny yellow speck of my tent. In the other direction the Fortresses blaze blood-red in the evening light. The sky above is overcast, the air unexpectedly still. Everything in this wilderness—the glaciers, the towers, the distances in between—has proved a far greater challenge than we expected. Yet the four of us have faced it alone.

The wind can take you prisoner, I think, or it can set you free. I turn around once more and savor the silence.